York rock trio Blind Eye made their official hometown return on Friday at Fibbers. Joining them on the night were three other sets of rockers: Minster Conspiracy, The Blinders and Sugarking making it a whole evening of noise. 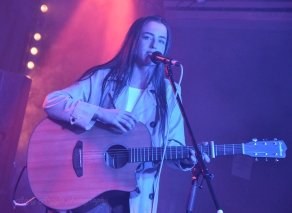 Minster Conspiracy opened the evening with their track Rollercoaster, starting things off on a note of classic rock and roll. Over the past couple of years, the teen band have been growing into their sound which is a style of pop rock akin to the likes of Paramore. The comparison was cemented later in their set during a spot on cover of Paramore’s Still Into You. However, the highlight of their performance was a cover of The Republic’s Counting Stars. The acoustic opening allowed singer Ellie’s crystal voice to ring out clearly.

It was time for something completely different when shaggy-haired trio The Blinders took to the stage. They opened with some big psych punk riffs and barely stopped throughout their set. Equal parts nihilism and swagger, it’s difficult to put your finger on just what The Blinders are. That’s a good thing. The hypnotic riffs kept the audience captivated, almost to the point of brainwashing and it was impossible not to dance. A hidden gem from Doncaster.

Following them were Liverpool’s Sugarking. Energetic and visual, their style was very much bedded in the high-tempo rock style of the late 90’s and early 00’s. Their set showcased tracks from their new EP as well as a brand new, never heard before track: Drawing on the Wall. Set highlights were the marching beat of Close to You and EP track Counting Stars.

Finally, it was time for the main event with Blind Eye taking the stage. The boys have been away at university, but have not been neglecting their music. They opened their set with a brand new track from their upcoming EP. They then really got the crowd going with a cover of Stevie Wonder’s Superstition.

Blind Eye have matured their sound while they’ve been away and presented styles ranging from heavy metal to Incubus-esque alt rock. There is no doubting their talent as individual musicians and their chemistry as a band. They closed their set with Blind Eye classics And I and Blood and Diamonds, which also shored up their chemistry with the crowd. There’s a bright future in store for these guys.