Last Friday, American musician Mike Krol came to Leeds. Having reviewed his album and interviewed him earlier this year, we were keen to catch him live.

Review and photos by Martin Frank

First tonight at this famous venue is local boy Damian Hughes as Hypnosister, looking as crazed as Thomas Dolby, alone he confidently blasts out his songs with the natural flair and skill of a guy who’s born to perform. I couldn’t get enough of him, catchy songs including the spooky Ghost with a quirky leant-back guitar style he’s as mesmerising to watch as he is to listen to. His catchy tunes are an easy listen you’ll be singing along to. Find him on iTunes. He needs some serious exposure this sort of talent can’t be missed.

Cowgirl were second and, in contrast, filled the stage with three guitarists and a drummer, their sound full, powerful with clever riffs and head banging tunes that soon had the young audience bouncing. They are modern and retro, and cool as funk. My only issue tonight was that the vocals were too quiet, a technical matter which was shame because when I downloaded them at home later, I missed some great lyrics. These guys have got to do the festivals and build their following. 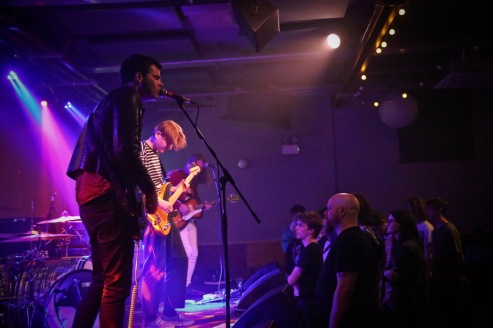 Okay, Mike Krol: the main event. I reviewed his album on its release in January this year. Power Chords is filled with energy, excitement and enthusiasm. Now the plan was to see how it translated live. Walking on stage with his heavily trimmed fringe and trademark black-eye, looking like a nerd who’s just been beaten up he dominated the stage as the band kicked in with the title track.

The atmosphere was electric because tonight was going to be special and the young audience knew it. Jumping, shouting and screaming out the small crowd exuberant as Power Chords filled the room. Krol is a true showman, leaving the stage and walking through the audience as he sang, climbing on the drums and leaning on his mike shaking his tambourine reminding me of Liam Gallagher but here was a guy understating. He wasn’t trying to be cool, he didn’t need to, less is more he has the punk attitude I grew up with. 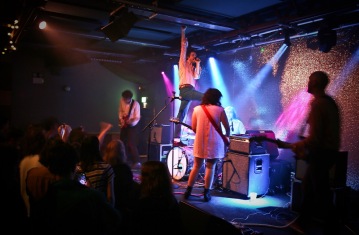 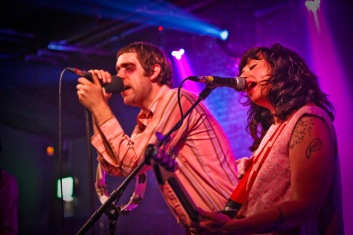 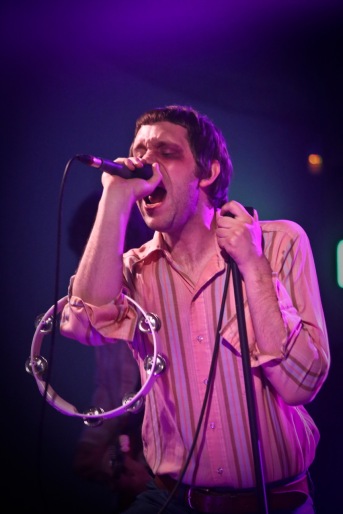 His music is filled with the power of Elvis Costello’s Pump It Up, they played original tracks from the album with a hybrid of good old-fashioned New Wave Punk and American rock.  Little Drama¸ carried the song with a heavy bass drum and the power of any song by The Damned. I love this guy. This is my kind of music and I felt as young again as the kids at the front bouncing to every beat he could throw at them. Krol is pure magic, a class act and, as all good acts, left me wanting more. Power Chords is a classic album in the rock/punk style, a fusion of good old-fashioned powerful tracks to make you want to bounce about the room and blow away the cobwebs.

I am pleased to repeat my comments about the track Nothing to Yell About, live or recorded Mike Krol has everything to yell about, top band, top tracks, if you love your music strong, clever and bouncing.